By the way of Deekshai a disciple get divine consciousness in the pupil of his eyes.
For a normal person the divine light in the eyes is idle and a person acts as per his Karma(s). By acting as per his whims which is influenced by his Karma’s a person keeps accumulating the Karmas and will always undergo repeated birth(s) and death(s).

When the divine light is Kindled after Deekshai and does Penance on this divine light the light will increase and so do the divine consciousness and divine fire which will burn out one’s karmas.

Only after Deekshai in which the divine light present in the pupil of eyes of disciple is rekindled, will a disciple be able to do penance by keeping his mind on this divine consciousness that is got after deekshai.
Deekshai is what getting baptized by divine fire and holy spirit.

The divine light in our eyes can only be induced by the divine light from the qualified Gnana SarGuru.
Today our SarGuru SivaSelvaraj by the grace of all saints and Gnanis has been seated on the GuruPeedam and providing Tiruvadi Deekshai to the People coming to him. In fact through him it is TiruArutprakasa Vallalar who is giving this Tiruvadi Deekshai.

By the way of Deekshai Saint Vallalar will be with our soul helping and guiding us.
Jesus said “Eyes were the lamp of our body and the Lord is as divine light and if one walks in the light he can reach the lord”.

The Eyes which were the lamp of our body can be lit only by other lamp that is already lit and which is capable of lighting other eyes. Only a qualified SatGuru who is made as Guru by great Gnanis and Saints can lit the divine light of one’s eyes.

After getting Deekshai one can go inside within them using the divine light of their eyes and then realize the lord.

During Deekshai one has to first open his eyes and see the Eyes of the Guru. Penance has to be done by keeping the eyes open and thinking on the divine consciousness that is got.

As we seen earlier Karma is the one that hides the divinity within us. There is a small hole of the size of needle tip in the center of the Pupil of the eyes. This hole is covered by Karma as 7 layers.

During Deekshai Sadguru pierces the layer of karma and lits the divine light of our eyes by his divine light present in his eyes. This process is what is called as taking birth again. One who has taken Deekshai is called as Twice born.

So it is important for any person who has taken birth in the human body to see a guru and get Tiruvadi Deekshai.

Every person gets father and mother automatically and only by his efforts and search he can get a Guru. It is very important to get a Guru and get bapitized by him. Only after getting deekshai one can do penance , burn out his karmas and realize himself and then realize the Supreme Lord. 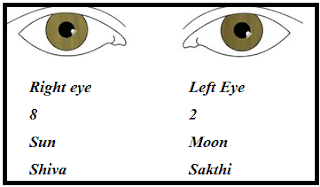 Posted by Sivamjothi at 2:33 AM 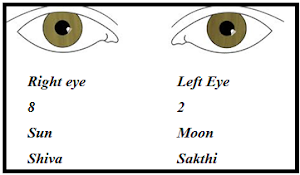